Rescuing the world from drowning

Sea level rise is one of the most challenging impacts of climate change. The continued rise in sea levels, partially caused by the melting of the ice sheets of Greenland and Antarctica, will result in large scale impacts in coastal areas as they are submerged by the sea. Locations not able to bear the costs of implementing protection and adaptation measures will have to be abandoned, resulting in social, economic and environmental losses.

The most important mitigation goal for sea level rise is to reduce or possibly revert carbon dioxide (CO2) emissions. Given the time lag between emission reductions and the impacts of climate change, new adaptation measures to reduce sea level rise should be proposed, developed and if possible, implemented.

A proposal that I developed during my D.Phil degree ten years ago, which resulted in a paper on the Mitigation and Adaptation to Global Change Journal1, shows that submerged barriers in front of ice sheets and glaciers would contribute to reducing the ice melt in Greenland. Edward Byers and I propose the construction of ten barriers at key glaciers in Greenland to stop the flow of warm salty ocean water reaching glaciers in Greenland and Atlantic, which are the main contributors to ice melting. This could reduce sea level rise by up to 5.3 meters at a levelized cost of US$275 million a year. The cost of the barriers is only a fraction of the estimated costs of adaptation measures to sea level rise around the world estimated to be US$1.4 trillion a year by 21002.

The barrier consists of several plain sheet modules of marine grade steel around 200 mm thick connected to cylindrical steel tubes with air inside to keep the barrier floating. The depth of the barriers varies from 30 – 500 meters and the required length to stop the sea water from entering the fjords, where the glaciers are located. As no such barrier has been developed before, we propose three main steps for the construction of the barrier:

The concept of reducing the contact of seawater and glaciers to reduce ice sheet melting was first published by Moore in Nature3, and Wolovick in The Cryosphere4 with the construction of submerged dams. A graphic representation of the concept is presented in Figure 1. As you can see the barriers should be positioned just after the glacier cavity, where the depth required for the barrier would be the smallest. Our cost analysis shows that using submerged barriers would have one or two orders of magnitude lower costs when compared to submerged dams. Additionally, submerged barriers could be easily removed, if the need arise.

This solution, however, should not be used as an excuse to reduce focus on cutting CO2 emission. If the world continues to warm, not even submerged barriers in front of glaciers would be able to stop ice sheets melting and sea level rise.

Climate systems science is personal and so are the risks 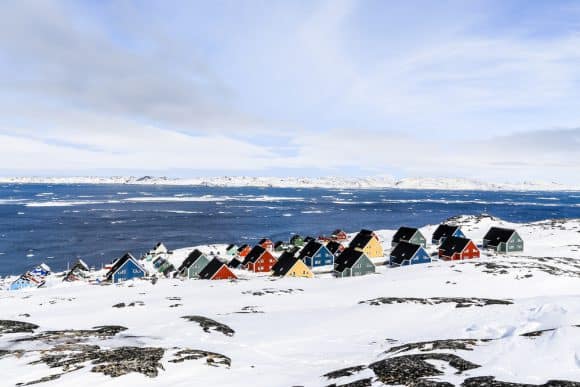 Around 8,000 kilometers away from Vienna, Austria, hundreds of Arctic coastal communities are at imminent risk from the melting ice and coastal erosion. Indigenous Arctic populations struggle with food insecurity every day, living off small fractions of what their catch would have been only a few years ago. Their culture and their way of life, so dependent on sea ice conditions, are melting away, along with the very root of the Arctic ecosystem.

However, construal level theory, a social psychological theory that describes the extent to which distant things become abstract concepts, tells us that 8,000 kilometers is just far enough for Arctic peoples to lose tangible existence in the minds of urban citizens. Unlike Arctic communities, who experience the direct effects of climate change at each meal, commercialized lower latitude societies don’t have to face the environmental consequences of choosing to drive to the grocery store instead of bike.

Nevertheless, those consequences are very real, even if the impacts on the Arctic and climate system don’t always catch our attention. Sea level will continue to rise for the next several hundred years—it takes 500 years for the deep ocean to adjust to changes at the surface.

On Friday, 22 July, former Chief Scientist of the UK Met Office Dame Julia Slingo and former Chair of the IIASA Council Peter Lemke joined us at IIASA for a joint lecture on climate risk in weather systems and polar regions. The lecture had one underlying theme: in order to make informed decisions on climate change, we need to embrace uncertainty with a broader understanding of what’s possible. That means that the far-away Arctic needs to be seen as nearby and relevant, and that climate change forecasts once seen as ‘uncertain,’ should instead be interpreted as ‘probable.’

“It’s a matter of how you communicate it,” says Lemke.

Perhaps Hollywood’s obsession with apocalyptic disaster narratives serves some kind of purpose after all—the stories seem outlandish, but films translate them into concepts we can understand and scenes we’re familiar with.  It’s hard to picture what it would be like to live in a world that is 2°C warmer, but thanks to Hollywood special effects, we can picture what it would be like if storms of epic proportions engulfed the Statue of Liberty in a gigantic tidal wave.

“We have get down to people’s personal experience. That’s why I’m so against the use of things like global mean temperature, because people can’t relate to that,” says Slingo. “I am very keen on using narrative, but based on science, so people have access to the evidence for why we have this story that we tell about how climate change could affect them personally.”

Of course, we can’t give Hollywood too much credit: these stories are dangerously lacking input from actual climate science. Nevertheless, armed with the forecasting tools and technologies that have advanced so much over the past decade or so, we can counter uncertainty and get a better understanding of the risks we face. For example, using improved computer models and satellites that determine the age and thickness of ice, we can determine the rates of receding ice, and how much that will affect sea level rise in coastal communities.

Likewise, social media makes it easy to transmit information rapidly to a large audience that might not have been reachable otherwise. Reaching people where they are is of paramount importance—while scientists can put painstaking effort into presenting the most accurate, unbiased account of probable risks, this is just one facet of any given decision. In the end, it is the public and the policymakers that represent them that must make the decision about what actions to take, based on a complete narrative that includes the socioeconomic and cultural factors involved.

“It’s all about dialogue at the end of the day. One of the things I learned as MET office chief scientist was that based on the evidence I was giving to government, you would think that the policy would be quite clear,” says Slingo. “But there are other aspects to take into consideration, such as unemployment or other policy implementation capacities and societal implications.”

That’s why Lemke and Slingo both make huge efforts to communicate with the public, especially with the impressionable, optimistic, social media savvy and politically mobilizing younger generations. From their interactions and outreach with the public, Lemke and Slingo know that once you put climate change in proximity and translate science into narratives that are relevant to the lives of individual citizens, the public does care about climate change. They want to know more, and they want to do something about it.

When it comes to environmental advocacy, education is power, especially when it translates the high-end risk probabilities of climate science into relatable narratives. For Lemke and Slingo, that creates a huge opportunity for scientists of all backgrounds.

“I don’t think climate change has to be depressing. It’s a fantastic opportunity for a whole generation of scientists and engineers to tackle a great problem,” says Slingo. “I actually have the confidence that we’ll solve it.”

By  Hannu Halinen, special advisor to the director general and CEO of IIASA

The Harpa Center at Reykjavik Harbor is the scene for one of the biggest annual gatherings of Arctic researchers, politicians, business representatives, indigenous peoples, nongovernmental organizations, and students; the Arctic Circle Assembly. Under the roof of this architectural landmark some two thousand participants spend a long weekend discussing a multitude of Arctic issues. This year there was an added attraction next door to the Harpa Centre: Finland, as a part of her 100 year independence celebration, had brought the multipurpose ice breaker “Nordica” to Reykjavik. A number of the assembly events were held on board the vessel, and everybody—both assembly participants and Icelanders— wanted to take the rare chance to see this impressive ship. The sea around Iceland is ice-free thanks to the Gulf Stream; hence no need for ice breakers.

The official assembly program consisted of a few high-level plenary sessions and many parallel break-out sessions. IIASA and the Arctic Futures Initiative (AFI) were introduced at the assembly in 2015, and I was busy at that time introducing Pavel and Anni to my Arctic colleagues. I can safely say that the time then was effectively used to build and strengthen the network between IIASA and Arctic actors.

By 2017 we were many steps ahead, as AFI has become a well-known Arctic endeavor and launching the collaboration between IIASA and the Arctic Circle was a major development. I have had the privilege to be associated with AFI over three years now, and one of the challenges for me all along has been to explain to those interested what AFI is about. Because my background is as a diplomat and a civil servant, the concept of a research project has been something new to me—and to many other decision makers and business leaders as well.

Everybody is asking what new angle can the AFI bring, and what’s in it for me? The collaboration between the Arctic Circle and AFI is a prime example on how to respond to the question. A wealth of insights and information is provided in hundreds of interventions at the assembly. What is missing is the analysis, follow up and possible implementation of the inputs during the Assembly. Here AFI can give the crucial assistance needed through systems thinking, models, and scenarios.

Two years ago we had one break-out session at the assembly. This year AFI was presented by Pavel and the former President of Iceland Olafur Grimsson at a plenary, as well as in three well-attended break-out sessions covering how systems analysis perspective can be invaluable to the challenges and opportunities that the Arctic faces; how the opening of the Northern sea route might impact global trade, and Arctic fisheries assessments.

The network is now largely built, the project development phase is coming to the end, and the focus of the work is shifting to carry out the project itself. But many issues still need to be tackled: who will organize and carry out the work, for example, how to solve the funding issues, and so on. I have believed in this project from the beginning. With wise and decisive action the remaining questions can be solved.