Building bridges between Europe and Asia 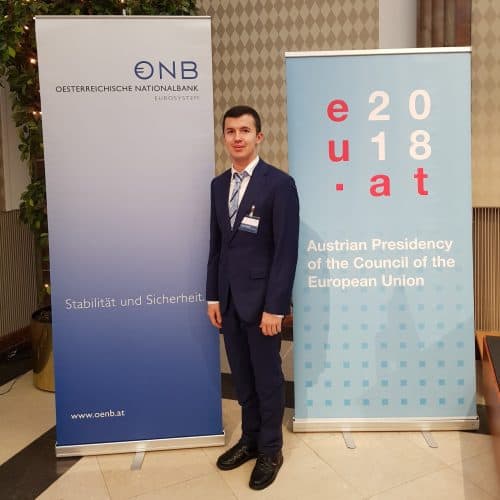 On 14 December 2018, the Austrian Central Bank and the Reinventing Bretton Woods Committee co-organized a high-level conference on “Connecting Europe and Asia,” convening high-level policy makers, top business executives and renowned researchers. Taking place toward the end of the Austrian Presidency in the Council of the European Union, the goal of the event was to discuss ways to improve cooperation between Europe and Asia.

As a true Eurasianist and a member of the European Society for Eurasian Cooperation I was really interested in attending the conference.

It was opened by the governor of the Austrian Central Bank, Ewald Nowotny, who said that cooperation between Asia and Europe is vital, especially with China’s growing economic and political influence. Nowotny expressed regret that some countries see this as a challenge rather than an opportunity. Europe, however, remains the best place to be because of its economic strength.

Marc Uzan, the executive director of the Reinventing Bretton Woods Committee, noted that we live in a new age of connectivity. The economic ties between the EU and Asia are quite strong but there is still space for stronger connectivity in the form of physical and non-physical infrastructure, market integration, and maintaining stability in Central Asia. Uzan highlighted the role of the European Investment Bank in various connecting projects.

During the panel session on “Integration in Europe: European Union and Eurasia”, Elena Rovenskaya, the program director for Advanced Systems Analysis at IIASA, presented the institute as a neutral platform for depoliticized dialogue. IIASA has been running a project on the “Challenges and Opportunities of Economic Integration within a Wider European and Eurasian Space” since 2014, analyzing transport corridors, foreign direct investment, and convergence of technical product standards between EU and the Eurasian Economic Union.

This report was especially exciting for me because I had a great opportunity of participating in the International Youth Forum “Future of Eurasian and European Integration: Foresight-2040”, hosted by IIASA in December 2017, and found it interesting to see how research into Eurasian integration at IIASA has advanced since then. The concept of dividing the integration in two subgroups (bottom-up and top-down) suggested by Rovenskaya also seemed new to me.

‘Bottom-up’ integration requires coordination between participating countries and involves development of transport and infrastructure  – known as the Belt and Road Initiative – including development of the Kosice-Vienna broad gauge railway extension, and the Arctic railway in Finland. The top-down scenario would be based on cooperation between regional organizations and programs such as the EU, the EAEU and the Eastern Partnership. The challenge lies in harmonizing different integration processes.

I find it unfortunate that despite the positive impact of theoretical EU-EAEU economic integration and cooperation showed by IIASA’s research, the economic relations between the EU and the EAEU are currently defined by foreign policies and not by economic reasoning.

In his address, William Tompson, the head of Eurasia Department at the Global Relations Secretariat of the OECD, highlighted that the benefits of enhanced connectivity were not automatic and that complex packages, going beyond trade and infrastructure, would be needed. I consider that Tompson raised an important point that we should not exaggerate the benefits – landlocked locations and distance to global markets can be mitigated but not eliminated. Coordination among countries to remove infrastructure and non-infrastructure bottlenecks will necessary.

Tompson’s empirics convinced me that there is a call for change. Kazakhstan pays US$250/t of freight to reach the countries with 20% of the global GDP, compared to just US$50 for Germany and the US. This is due to factors like distance, speed, and border crossings.

I was impressed by Tompson’s international freight model. It shows that logistics performance is generally poor, and competition could be enhanced. The link between policy objectives and investment choices is often unclear. Tompson also criticized the ministries of transport, which he called “ministries of road-building”, for not knowing that transport was far more than that.

The head of unit in the European Commission, Petros Sourmelis, presented the EU’s perspective. According to him, the EU is open to deeper cooperation and trade relationships with its Eastern partners, however, there are many barriers, including the EAEU’s incomplete internal market.

I consider the proposal made by Sourmelis that “one needs to start somewhere” and his hope for more engagement quite promising, but engagement at the political level is some way off. However, the EU has seen constructive steps from Russia and is open to talks to build trust.

Member of the Board of the Eurasian Economic Commission Tatyana Valovaya closed the high-level panel session. I think it was a good lead-up to start with a historical analogy of the ancient Silk Road. According to her, the global trade geography in the 21st century is shifting once again to Asia and China was likely to become a leading power within the next 20 years. I was encouraged by the idea that regional economic unions will likely lead to better global governance and building interregional partnerships between Europe, Asia and Eurasia will be vital to achieve it.

Valovaya reminded delegates that in 2003 a lot of political and technical work had been achieved towards EU-Russia cooperation, which had then been stopped for political reasons. In 2015, the EAEU began wider cooperation with China as part of the Belt and Road Initiative, and in May 2018 a non-preferential agreement was signed to harmonize technical standards and custom regulations, to decrease non-tariff barriers as much as possible and to support cooperation projects in the digital economy.

I share the view of Valovaya that the EAEU should not only consider China as a key partner. Valovaya gave the US as a good example, which has multiple economic partnership agreements. She admitted that the EAEU had some “growth pains” but stressed it is normal for such a project and efforts are focused on solving the problems.

As for me, I believe it is necessary to understand the fundamental differences for the further connectivity. Valovaya emphasized that the EAEU was not aiming to introduce a common currency or to create a political union like the EU. EU-EAEU cooperation will strengthen both unions. More technical cooperation will be needed. And, of course, the leaders of the EU should be participating in the dialogue to better understand the EAEU and its work towards more connectivity in Eurasia.