Climate risks, limits, and a need for transformational adaptation 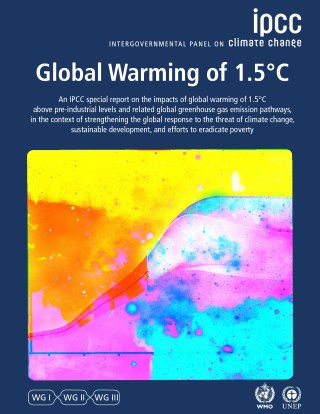 The Intergovernmental Panel on Climate Change (IPCC) just approved its Special Report on Global Warming of 1.5°C (SR15). It took long hours of discussions between the body of authors and representatives from about 130 IPCC member states gathered at the approval session in Korea, to get the highly anticipated report accepted. The report was requested by parties to the United Nations Framework Convention on Climate Change (UNFCCC) as set out in the Paris Agreement in 2015, that urged parties to limit warming to “well below” 2°C and pursue efforts towards 1.5°C of warming above pre-industrial levels. Countries that are severely vulnerable to climate change such as small-island states, expressed a particular need for the report. The drafted text of the summary for policymakers (SPM) remained largely intact throughout the approval session and the science was well respected by the parties (as has generally been the case for the IPCC). This bodes well for the IPCC’s process of reporting the most up to date information on climate science to national and international decision makers who closely review and comment on drafts of texts throughout the writing process.

The report, composed of five chapters and the SPM, discusses among other topics whether the Paris target of 1.5°C above pre-industrial temperature is still achievable; what the risks we face are at 1.5°C and 2°C of warming; what this will mean in terms of mitigation and adaptation; and what the synergies are between mitigation, adaptation and the Sustainable Development Goals (SDGs).

Below my take on how the SR15 answers some of these questions:

The world is on its way to breaching 1.5°C by around the 2040s, which will lead to further warming if current greenhouse gas emissions trends prevail and current nationally determined contributions (NDCs) are not upgraded. Warming can still be stabilized at 1.5°C, but it is an ambitious target that depends on halving emissions over the next 10 years and becoming carbon-neutral by 2050.

The report shows that we are already seeing serious consequences of a 1°C warming in the form of significant increases in some weather-related extreme events (such as the frequency, intensity, and/or amount of heavy precipitation in several regions), exacerbated sea level rise, and other effects on important terrestrial and oceanic systems. In terms of future warming, the report shows that a half-degree change, which we have actually seen over the last 50 years, indeed makes a difference. Risks will be higher than today at 1.5°C and will further increase at 2°C (and beyond).

Adaptation and its limits: A need for transformation?

In light of the above, adaptation is essential and needs to be ramped up. However, for the first time, the IPCC presents evidence on hard and soft limits to adaptation, of which some would already be reached at 1.5°C. Statement B6 of the SPM reads: “Most adaptation needs will be lower for global warming of 1.5°C compared to 2°C (high confidence). There are a wide range of adaptation options that can reduce the risks of climate change (high confidence). There are limits to adaptation and adaptive capacity for some human and natural systems at global warming of 1.5°C, with associated losses (medium confidence).”

So, what should we do in terms of adaptation in light of pervasive risks becoming increasingly severe and ultimately breaching adaptation limits? Statement A3.3 of the SPM suggests that, “Future climate-related risks would be reduced by the upscaling and acceleration of far-reaching, multi-level, and cross sectoral climate mitigation and by both incremental and transformational adaptation (high confidence).”

Throughout the document, the SR15 discusses what is needed in terms of standard adaptation (incremental) and transformational adaptation. An example of incremental adaptation is to continue building sea walls to manage increasing flooding from sea level rise. Adapting community and regional planning so that people, key assets, and buildings are moved out of harm’s way on the other hand, would be rather transformational–and often have a holistic and systemic component. The report also shows that more effort will be needed to better understand what transformational risk management processes may entail concretely.

Transformation: What does it take?

Transformational adaptation may not always be needed uniformly across the globe, but as the report shows, communities in regions vulnerable to sea-level rise risk, flooding, heat, and drought already clearly need significant support, and in a 1.5°C or 2°C world, much more would be needed. The report also shows that increasing investment in physical and social infrastructure is a key enabler of necessary transformations that enhance the resilience of communities and societies. Upgrading climate adaptation efforts will be fundamental to absorbing some climate change impacts and not critically affecting the achievement of the SDGs. What is more, the SR15 points out that the coordinated pursuit of climate resilience and development is the way forward to achieving the ambitious mitigation and adaptation targets set out, while seeking achievement of development goals such as those formulated in the 17 SGDSs.

Among others, three main implications for adaption (and climate risk) science, policy, and practice can be drawn:

The final, open question for all of us is of course whether the report can be more than another wake-up call and truly be a game-changer for limiting warming to 1.5°C while ramping up adaptation efforts. The science is there. Broad-based dissemination efforts with policymakers and advisors, experts, the private sector, and civil society are being rolled out. The political will to live up to the massive mitigation and adaptation challenges needs to follow now. Little time remains, and if we truly want to limit warming to 1.5°C and mitigate the associated risks, we need to take decisive and bold steps towards carbon-neutrality and climate-resilience now.