Having just finished tenth grade, Lillian Petersen from New Mexico, USA is currently spending the summer at IIASA, working with researchers from both the Ecosystems Services and Management (ESM), and Risk and Resilience (RISK) programs on developing risk models for all African countries.

At a talk Petersen gave at the Los Alamos Nature Center/Pajarito Environmental Education Center, her method for predicting food shortages in Africa from satellite images caught the attention of Molly Jahn from the University of Wisconsin-Madison. Jahn, who is collaborating with the ESM and RISK programs at IIASA, was so impressed with Petersen’s work that she added her to her research group and connected her to IIASA researchers for a joint project. 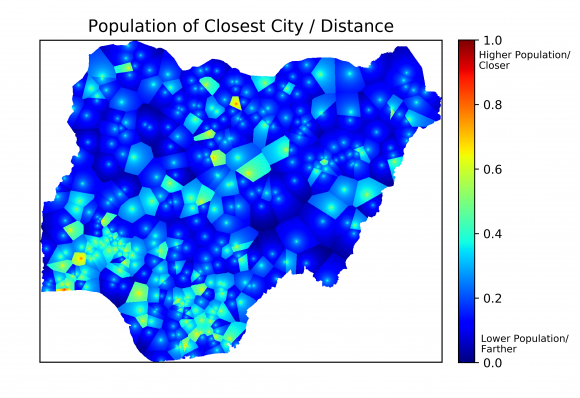 One of the indicators used to estimate poverty in Nigeria. © Lillian Petersen | IIASA

Knowing which areas are at risk for disasters like conflict, disease outbreak, or famine is often an important first step for preventing their occurrence. In developed countries, there is already a lot of work being done to estimate these risks. In developing countries, however, a lack of data often hinders risk modeling, even though these countries are often most at risk for disasters.

Many humanitarian crises, like famine, are closely connected to poverty. However, high resolution poverty estimates are only available for a few African countries. This is why Petersen and her colleagues are developing methods to obtain those poverty estimates for all of Africa using freely available data, like maps showing major roads and cities, as well as high-resolution satellite images. Information about poverty in a certain region can be extracted from this data by considering several indicators. For example, areas that are close to major roads or cities, or those that have a large amount of lighting at night, meaning that electricity is available, are usually less poor than those without these features. The researchers are also analyzing the trading potential with neighboring countries, the land cover type, and distance to major shipping routes, such as waterways.

As no single one of these indicators can perfectly predict poverty, the scientists combine them. They “train” their model using the countries for which poverty data exists: A comparison of the model’s output and the real data helps to reveal which combination of indicators gives a reliable estimate of poverty. Following this, they plan to apply that knowledge in order to accurately predict poverty with high spatial resolution over the entire African continent.

Once these estimates exist, Petersen and her colleagues will apply risk models to find out which areas are particularly vulnerable to disease outbreaks, famine, and conflicts. “I hope that this research will inform policymakers about which populations are most at risk for humanitarian crises, so that they can target these populations systematically in aid programs,” says Petersen, adding that preventing a disaster is generally cheaper than dealing with its aftermath.

The skills Petersen is using for her research are largely self-taught. After learning computer programming with the help of a book when she was in fifth grade, Petersen conducted her first research project on the effect of El Nino on the winter weather in the US when she was in seventh grade. “It was a small project, but I was pretty excited to obtain scientific results from raw data,” she says. After this first success she has been building up her skills every year, by competing at science fairs across the US with her research projects.

Her internship at IIASA gives Petersen access to the resources she needs to take her research to the next level. “Getting feedback from some of the top scientists in the field here at IIASA is definitely improving my work,’’ she says. Petersen is hoping to publish a paper about her project next year, and wants to major in applied mathematics after she finishes high school.