Envisioning a better global future: Reporting back from the World in 2050 launch meeting

“Vision is the most vital step in the policy process. If we don’t know where we want to go, it makes little difference that we make great progress. Yet vision is not only missing almost entirely from policy discussions; it is missing from our whole culture.” Donella Meadows

In the face of increasing human pressures on the planet, in a time that is now described as the Anthropocene, the need to finding pathways toward a sustainable and just global future is critical. In 2015, the world’s nations agree on a set of Sustainable Development Goals (SDGs) – aiming to subscribe to a global narrative on a desired future of human development in all its dimensions.

The World in 2050 project aims to support the vision of the SDGs by quantifying it and assessing its feasibility through model simulations covering a range of development and environmental dimensions. The goal is to use top science to show that a better world is possible, and explore what transformations and trade-offs are needed to achieve that future. The world’s top modelling groups on population, energy, food, water, technology and other sectors have been invited to join forces for this project.

At a first meeting at IIASA in Laxenburg from 10 to 12 March 2015, the project organizers brought together world-leading modelling teams as well as representatives of global organizations like the OECD, the IMF, the Global Environment Facility and the World Energy Council. A number of us also had experience with using future scenarios for policy and strategy development.

The meeting had two purposes: to outline a way forward for the project, and to allow modelling teams to update each other on their most recent work. Excellent presentations on many dimensions of global change led many to believe that the combination of these modelling efforts would be able to provide a strong exploration of the feasibility of the SDGs. Recommendations were also made to find ways to integrate highly relevant, but not easily quantifiable, dimensions of human development, such as conflict, governance, cultural and value changes and issues of gender inequality. Other challenges that were highlighted had to do with the fact that the future is fundamentally uncertain, and systems models can have difficulty anticipating the impacts of future drivers that are not part of the current scope of concern. The solution to such challenges can be a reflexive approach to integrating model simulation and qualitative information, such as stories about future pathways, that can try to take such dimensions and uncertainties into account and also make clear what they don’t capture. 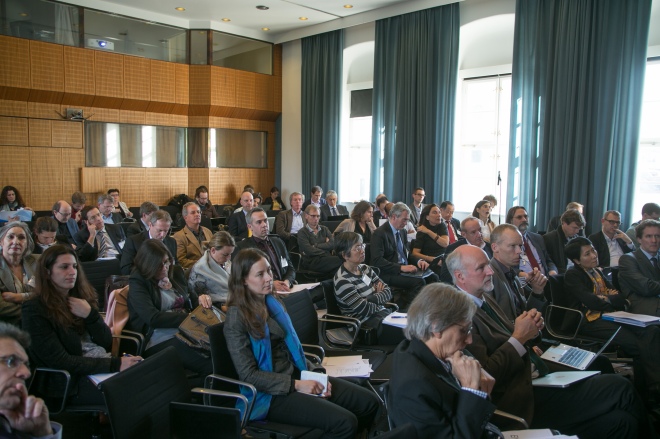 The launch workshop for the World in 2050 project involved researchers from a number of key institutions. Credit: Matthias Silveri / IIASA

What I saw as perhaps the key conversation in the meeting, however, is one that characterizes many discussions about how to productively engage with the challenges of the future. Is it better to build one unifying vision, or to develop many different future scenarios from the perspectives of a wide range of actors? In the context of the World in 2050 project, developing a single, quantified vision for the SDGs has the benefit of harnessing the power of the best global change research to create a powerful, deeply examined notion that a better world is possible, supported by the voices of global-level organizations. An alternative approach that we discussed was to engage regional and national decision-makers first and build and quantify a diversity of visions and pathways from the perspectives of these actors. The benefit of this approach is that national and regional decision makers may be more likely to perceive this quantitative visioning  as useful, and that there is space for and ownership of diverse notions of a better future based on different sets of values.

The leaders of the World in 2050 project took these considerations into account and proposed a way forward: focus on a single global, quantified vision first, to kick-start dialogues about the feasibility of a transformative future at the global level by providing top-level science. Jeffrey Sachs, as one of the project leaders, argued that the SDGs will already involve many interactive processes that allow for a diversity of ideas and conversations at national and regional levels on how to achieve these goals; and that rather than trying to support all SDG-related work, the World in 2050 project would have the most complementary value if it provided its clear, quantified global vision first. Then, a next phase of the project will be to connect to global regions and to national-level processes and find out how the insights from the project can be used. Many of us in the meeting indicated that we have strong networks at regional and national levels that can support this phase. From the beginning of the global modelling project, Sachs and colleagues already envision a strong need to have regional diversity in the analysis, to make sure its results are relevant at that level.

”Also clear from the discussions was that this vision should not just be aimed at policy makers, but that it should speak powerfully to people in all walks of life. Widespread public support for such a vision could be a strong contributor to political momentum. Several speakers referred to the impact of the 1972 “Limits to Growth” study, which, though controversial, stimulated thinking and action around environmental change and sustainability worldwide. Innovative communication approaches that powerfully engage people with the vision will be crucial – if future visions can be made real in an experiential sense, they have a much stronger chance of changing behavior and decisions.

Collaborations across international networks
The World in 2050 project plans to build on the excellent simulation-based work on transformation pathways toward SDGs done by the Dutch Environment Assessment Agency.

It will be very interesting to see the global vision take shape and to help connect it to regional and national action and strategy. With IIASA colleagues from the GLOBIOM team, the CGIAR’s Climate Change, Agriculture and Food Security program is helping decision makers in Africa, Asia and Latin America develop better policies using socio-economic and climate scenarios, and from our experience, working with future pathways that are inspiring as well as feasible is very attractive to governments and other actors.

Other interactions with complementary projects can be explored – for instance, the “Bright Spots – Seeds of a Good Anthropocene”  project takes an  opposite, bottom-up approach to future visioning – collecting local “seed” practices with global, transformative potential and combining them to foster dialogues about a better Anthropocene. A similar process for bottom-up transformation pathways on the future of food in Europe also involves IIASA researchers.